Joanna Morgan is a Professor of Geophysics in the Department of Earth Science and Engineering at Imperial College, London. She received a BSc in Geophysics from Southampton (1980) and a PhD in Marine Geophysics from Cambridge (1988). The year of her BSc coincided with publication of the pioneering paper by Luis Alvarez and his co-authors advocating the idea of giant impact as the cause of mass extinction at the K-T boundary. The “smoking gun”, the Chicxulub crater in Mexico, was found 10 years later, when Jo was just starting her professional academic career.

The Chicxulub impact crater is the only known terrestrial impact structure with a global ejecta layer and that has been directly linked to a mass extinction event. Chicxulub’s role in the Cretaceous/Paleogene (K-Pg, known earlier as the K-T) mass extinction and its exceptional state of preservation make it an important natural laboratory for studying both the formation of large impact craters on Earth and other planets and the effects of large impacts on the Earth’s environment and ecology. Chicxulub is buried under about a kilometer of post-Cretaceous sediments and must be studied by expensive drilling programs or indirect geophysical methods.

Jo’s first encounter with the Chicxulub crater and with the impact community happened in 1994. In 1996, Jo was one of the leaders of a big international team undertaking the first seismic survey across the Chicxulub crater. In total, 650 km of reflection profiles were acquired; their data showed clearly that the transient crater diameter was about 100 km and thus supported the lower energy of impact. In addition, these data provided the first high-resolution look into the third dimension of a large terrestrial crater. New seismic experiments were shot across the crater in January and February 2005 by a team of scientists from Mexico, the United States, and the United Kingdom led by Jo and revealed the Chicxulub structure at an unprecedented resolution for any terrestrial impact crater. In 1997, Jay Melosh, introducing Jo’s first paper in Nature, wrote ‘planetary science conferences for several years have been disturbed by sometimes acrimonious exchanges between rival investigators of the structure. The arguments are not centered around the reality of the impact — that was settled to nearly everyone’s satisfaction years ago — but on just how big the structure really is, and therefore how lethal the event was’. Available data on gravity anomalies gave transient crater diameters that ranged from 90 to almost 200 km (and, hence, impact energies differ by a factor of 10). As Jay noted, Jo’s newly presented seismic data were capable of giving better answers than previously available.

For many geophysicists, it is more than enough to provide seismic profiles beneath an impact crater and to build a preliminary model of its interior. Not for Joanna. To confirm her model of the crater, she needed real rock samples from the crater interior, and so in 1998, she submitted her first proposal to drill the crater. In 2002, the International Continental Scientific Drilling Program (ICDP) sponsored a deep drilling project, producing a 1511 m borehole between the peak-ring and the crater rim. Joanna was one of the PIs in the project. Although successful, this project left unresolved, among other things, the geologic processes that produced the peak-ring morphology of the crater.

Parallel to the onshore effort, an offshore effort started down the long road of proposing a joint scientific continental/ocean drilling project to drill the peak-ring of the Chicxulub. It took 17 years (!!!) to transform this proposal into a real operation in the Gulf of Mexico, known as International Ocean Discovery Program (IODP)-ICDP Expedition 364. Joanna collaborated with Sean Gulick as co-chief scientists of the project, which consolidated the efforts of 34 scientists from 11 countries representing multidisciplinary research from geology to biology. The borehole was drilled at Site M0077 (21.45° N, 89.95° W) 25 kilometers north of the coastline in ~20 m water depth. The drilling occurred from 7 April to 26 May 2016, during which Jo was nearly always on the platform. Core recovery began at 505.7 mbsf (meters below seafloor) and continued to 1334.7 mbsf with >99% recovery. Because the platform was so small, only limited measurements and core descriptions could be undertaken before the core was placed into refrigerated storage and shipped to the Bremen Core Repository.

The first results of Expedition 364 were published in Science in 2016. Jo and her team summarized these geological results of the drilling project as follows:

Expedition 364 Science Party presented their preliminary results at important conferences to the impact cratering community in 2017 including ‘Frontiers in Geophysics’ lecture by Joanna Morgan at AGU Fall Meeting. Today, more than 30 papers have been published in highly ranked scientific journals on topics from impact processes to extinction mechanisms and recovery of life. All these studies would not be available without Jo’s leading role in this project and her determination to share her team’s discoveries with the community. Certainly, a large number of geological, environmental, and biological results will continue to emerge from the Expedition 364.

Joanna’s scientific curiosity is not limited to describing the geology of Chicxulub crater. Immediately after the analysis of the seismic data set Joanna suggested the first model of the peak-ring crater formation: downward and inward radial collapse of the transient cavity in the outer crater, and upward and outward collapse within the central structurally uplifted region. A few years later, Gareth Collins, her PhD student at the time, ran the first computational models of the Chicxulub formation which quantitatively confirmed this hypothesis. Later, more sophisticated models revealed additional details of the Chicxulub structure and its asymmetry in particular. For all these years, Jo collaborated with scientists who were working on other aspects of the Chicxulub impact and the K-Pg extinction: world-wide shocked quartz distributions, post-impact fires, and climate changes.

Over the course of her career, Jo has given numerous interviews to the science-interested public advocating Chicxulub and K-Pg extinction studies. She has appeared on both radio and TV, not only in Great Britain, but also in the US, Mexico, Australia, France, Japan, and Germany. Joanna actively collaborates with the Natural History Museum and the Science Museum in London, and gives popular lectures world-wide, with long-tail impacts in the public domain.

Despite more than 30 years of intense debate and hundreds of publications (>70 of which Jo led or co-authored), our understanding of the impact process is still far from complete, but Joanna Morgan truly deserves recognition for her significant and sustained contributions to impact research discoveries and to the public’s interest and understanding of impact cratering. She is an exceptional representative of the impact cratering community who well deserves the Barringer award.

I’ll start by saying how honoured I am to be awarded the Barringer medal. I’d also like to thank Richard Grieve for his kind words, as well as for his generosity with his time, acting as a mentor to me throughout my career.

On the day I received the news, I remember being a little bit disappointed because, accepting the medal at the Meteoritical Society meeting in Glasgow, would mean that I wouldn’t be able to go to Japan to watch the Olympics. Which is almost funny now –given what’s happened since. So I should have received my medal in Glasgow last week; Scotland is actually one of the few places in the world that I can actually travel to at the moment and PROBABLY not have to quarantine when I get back to London. Anyway, I didn’t make it to Glasgow, but was very excited to go as far as the North Downs instead (that’s about a 30 minute drive).

I received the Barringer award for my work on Chicxulub. When I first became interested in Chicxulub in 1994-1995, I would have never have anticipated that it would become a central focus of my research for the next 25 years. It has been a long rewarding journey, and I have a lot of people to thank; I’ll be mentioning some of them during my talk. I am a seismologist – I use seismic data to image and map structures below the earth’s surface, so one of the first things I was involved in was acquiring seismic data across the crater to try and determine its size and morphology. One of the lovely results from this work was a beautiful image of Chicxulub’s peak ring, which offered clues to how peak rings were formed. Many years later, this formational model was tested when we drilled into the peak ring in 2016. I’ve also spent more than 10 years trying to understand how the global K-Pg layer was formed, which seemed like a straight forward objective when Natasha Artemieva and I first started. But, as a consequence of that research, we were able to place constraints on the ignition of fires after the impact, as well as climatic gases released.

So, thank you to the Barringer Crater Company for sponsoring the award, thanks to the Meteoritical Society, the award committee and those who wrote to nominate me and write letters of support. I am looking forward to coming to Chicago to formally receive the medal. I do hope it goes ahead. 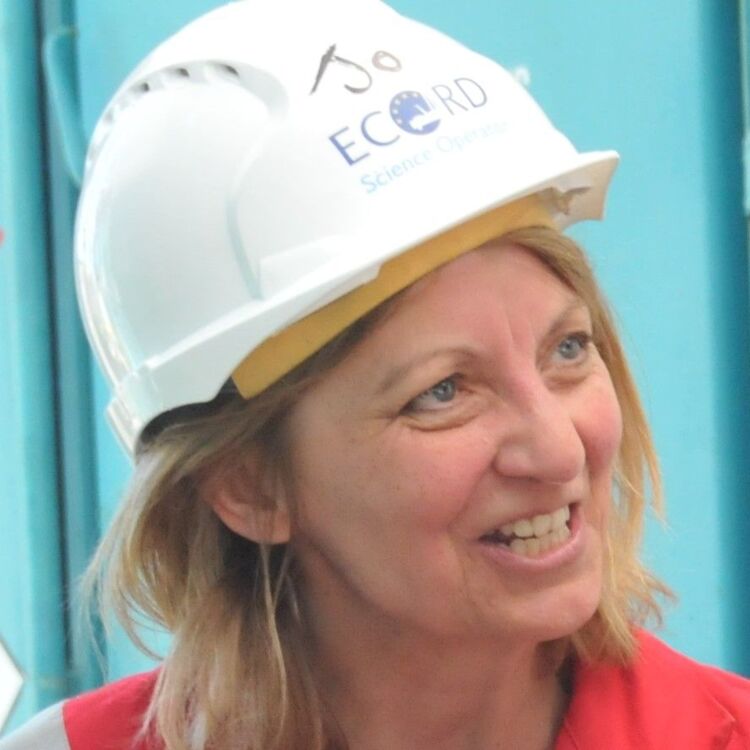