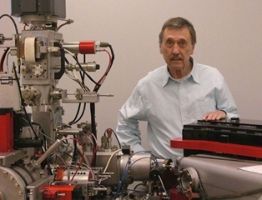 Ernst Zinner passed away on July 30th due to complications of mantle cell lymphoma, which he had battled for more than 19 years. Ernst was the Leonard Medalist in 1997 and a Fellow of the Society since 1988. He received a Diplom-Ingenieur (equivalent to an MS engineering degree) from the Technische Hochschule in Vienna in 1960 and earned a PhD at Washington University in 1972 in high-energy particle physics. Ernst had an interesting career in the space sciences that started with a chance encounter in an elevator with Robert Walker at Wash U (see Kevin McKeegan’s 2007 bio of Ernst Zinner in Meteoritics and Planetary Science 42, 1045-1054). Bob Walker invited Ernst to work for the newly established Laboratory for Space Physics (later part of the McDonnell Center for the Space Sciences) as a research associate. In 1989 Ernst was named a research professor in Physics and Earth and Planetary Sciences, a position he held until assuming emeritus status earlier this year.

He received many honors during his career. In the same year that he received the Leonard medal, he was awarded the J. Lawrence Smith Medal of the U.S. National Academy of Sciences. In addition to being a Fellow of The Meteoritical Society, he was elected a Corresponding Member of the Austrian Academy of Sciences in 2002 and was elected a Fellow of the American Physical Society (1991), the Geochemical Society and the European Association for Geochemistry (both in 1998) and the American Association for the Advancement of Science (2011). For his work collecting meteorites in Antarctica with Bill Cassidy’s team, he received the Antarctic Service Medal of the National Science Foundation in 1987.

According to the Wash U website, Ernst loved classical music, was an accomplishment pianist, played the harpsichord in a baroque music ensemble and played the cello. He is survived by his wife Brigitte Wopenka and his son Max.