Heinrich Wänke passed away on November 21, at the age of 87. Heinrich Wänke was well known for his work in Cosmo- and Geochemistry, which included studies on meteorites, Moon rocks, Martian meteorites and Earth mantle rocks. His research has had and continues to have a strong influence on present work on the formation and evolution of the terrestrial planets. Heinrich Wänke made many contributions to The Meteoritical Society. In 1983 he organized The Society’s annual Meeting in Mainz and from 1993 to 1994 he was president of The Society. He was a Fellow of The Society since 1976 and was awarded the Leonard Medal in 1980 for numerous contributions of fundamental importance to Meteoritics and Planetary Science.

Heinrich Wänke was a former director at the Max-Planck-Institut für Chemie at Mainz in Germany. He received his Ph.D. in physics in Vienna and took a post-doctoral position with Friedrich Paneth in Durham, England. In 1953 Paneth was appointed director at the Max-Planck- Institute of Chemistry in Mainz and Wänke went with him. After Paneth’s death in 1958 and years of hard work, he became director of the newly formed Department of Cosmochemistry, a position he kept until 1996, when he retired. However, he was still active in research until 2008.

Heinrich Wänke’s early research concentrated on the effect of cosmic rays and solar wind on meteorites. In the sixties Heinrich Wänke began to establish an analytical scheme for the analysis of meteorites and later lunar rocks. Using instrumental and radiochemical neutron activation techniques allowed the determination of major and a large number of trace elements. These analyses were the backbone of many years of innovative research on a variety of problems in meteoritics and planetology. Early on Heinrich Wänke argued for a Martian origin of SNC meteorites and actively participated in Mars missions. He was the first to recognize the significance of W during planetary differentiation and in estimating the size of planetary cores. Using the abundance of W and other siderophile elements to derive conditions of core formation on planets is presently a major field of research. His research contributed to a better understanding of the origin of the moon and accretion and differentiation of the terrestrial planets.

In addition to receiving the Leonard Medal from The Meteoritical Society, he was given the Abraham-Gottlob-Werner Medaille in 1999, the highest award of the German Mineralogical Society, and in 1991 the Friedrich-Becke-Medaille of the Austrian Mineralogical Society. Heinrich Wänke was a corresponding member of the Austrian Academy of Science and foreign member of the Russian Academy of Science and Associate of the Royal Society of London. From 1993 to 1995 he was Chair of the Solar system Working Group and a member of the Space Advisory Committee of ESA. From 1996 to 1998 he was president of the European Geophysical Society and in 1999 he received the Runcorn Florensky Medal of the European Geophysical Society. He was an outstanding scientist and his death is a major loss to The Society and the international planetary science community. 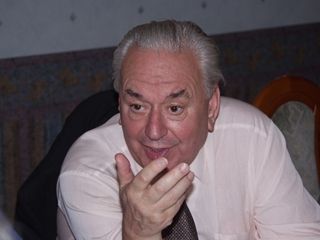