Prof. Keizo Yanai, a founder of Antarctic meteorite research, passed away on December 17, 2018, at the age of 77, in Morioka City, Iwate Prefecture, Japan, after several years of declining health. Keizo served many years as a curator at the National Institute of Polar Research (NIPR) of Japan where he collected and allocated thousands of Antarctic meteorites for our community. He was born on July 25, 1941, in Furudono, Fukushima, Japan. He received his B.S. from Akita University and his Ph.D. degree in petrology (Mesozoic igneous rocks) from Tohoku University.

Keizo first joined a Japanese Antarctic Research Expedition (JARE) as a field geologist in 1967-68 (JARE 9) to traverse to the South Pole from Syowa Station by snow vehicles (5182 km for a round-trip). The historical traverse taught him how to operate with snow vehicles in Antarctica. He visited the Yamato Mountains in 1973-74 (JARE 15), where an original purpose of the visit was geological fieldwork in the mountains. After the incidental discovery of meteorites on the bare ice field of the Yamato Mountains in 1969 by JARE 10, the ice field was recognized to yield meteorites. During the traverse to the Yamato Mountains, Keizo found some meteorites from his vehicle and modified his plan to organize a meteorite search instead of the originally planned geologic work. In spite of many logistical challenges posed by the snow vehicles, he collected 663 Yamato-74 meteorites during the 15-days’ field work. This work established that the Antarctic ice is an excellent host of various types of meteorites. Keizo also proposed a mechanism of meteorite concentration on the ice field associated with ice sheet movement around the mountains. His model is consistent with the occurrence of various types of meteorites with different ages at the same ice field. His research showed that new meteorites would appear from the ice with time.

After the successful meteorite recovery by JARE 15, the US-Japan Joint Program for meteorite search had started around the Transantarctic Mountains. In contrast to Japanese meteorite searches using snow vehicles, the US team used helicopter and foot searches for the field work. Nevertheless, Keizo had good eyes for the first discovery of a meteorite in Victoria Land at Mount Baldr on December 15, 1976. On the same expedition, he helped find large meteorites (total ~460 kg) at Allan Hills. Next year, he went back to Allan Hills to help collect 310 ALH-77 meteorites, including ALH 77005, the first martian meteorite to be found in Antarctica. The discovery of abundant meteorites in icefields along the Transantarctic Mountains led to the creation of the Antarctic Search for Meteorites (ANSMET) program in the U.S. After completing two field seasons at Victoria Land, Keizo returned to Yamato Mountains in 1979 for meteorite hunting with a big party (JARE 20). He conducted a systematic search and collected more than 3,500 Yamato-79 meteorites and 5 meteorites around the Belgica Mountains. They include lunar and martian meteorites, which opened a new window on planetary science and into understanding our solar system.

In addition to the meteorite searches, Keizo worked hard as a curator of Antarctic meteorites at NIPR. With very limited staff, he oversaw the preparation of thin sections, and chemical analysis of the new meteorites for classification. The initial petrological and chemical data were presented with beautiful photos, which were published as the red-covered book series “Photographic Catalog of the Antarctic Meteorites”. He also hosted the annual symposium on Antarctic meteorites at NIPR, and became an editor of the Proceedings of NIPR for Antarctic Meteorites.

Keizo desired to return to East Antarctica after the meteorite search in Victoria Land for ANSMET (1986-87), exploring a new field for meteorite hunting. The Sør Rondane Mountains are located about 600 km westward from the Yamato Mountains. A vast unknown ice field called Nansenisen was considered as a good place to find meteorites. In 1987, as a leader of the meteorite search party in JARE 29, he visited the Asuka Station which is located at the northern side of the Sør Rondane Mountains. It was hard to reach Nansenisen from the camp by snow vehicles, taking about one month for the traverse. Nevertheless, Keizo’s hunch proved to be correct, and the expedition found about 350 Asuka-87 and 2,000 Asuka-88 meteorites. After finishing the meteorite search, he accidentally wandered into a hidden crevasse area on the way to the Asuka Station from Nansenisen. On Friday, January 13th, 1989, Keizo and his colleague dropped down about 30 meters with their snow vehicle into a crevasse. To make matters worse, another colleague plunged into another crevasse during the rescue operation. Even though Keizo was injured, he encouraged the two injured colleagues to go home alive. After a week, they were rescued by a helicopter together with their meteorite collection. The accident in the Sør Rondane Mountains abruptly ended Keizo’s last expedition in Antarctica.

After the accident at the Sør Rondane Mountains, Keizo made every effort to get the two injured colleagues admitted to hospital for surgery in Japan as soon as possible against the decision of the headquarters of JARE. He deeply felt the responsibilities for his colleagues and their families. He said, “Of course, meteorite is most important, however, we have important things more than that. It may be more difficult to get the things understood by researchers than finding meteorites in Antarctica”. Finally, the operations were done in Japan. However, he was disciplined for his actions in the Sør Rondane Mountains, making it unpleasant for him to stay at NIPR. Keizo left NIPR to move to Iwate University in 1995, where he worked as a professor until his retirement in 2007. He travelled to the Mongolian desert for meteorite searches in 2002-05. He opened a private museum for meteorites and rocks in his home. After his retirement, he continued his passion for meteorite research and taught the importance of meteorites to high school students in the museum.

Keizo visited Antarctica 7 times and spent about 58 months (~ 5 years) there totally. He loved meteorites. He received many awards including Prime Minister’s Award of Japan (1969), Antarctic Service Medal from U.S. (1979) and Fellow of the Meteoritical Society (1990). His name is immortalized in the sky as the asteroid 9206 Yanaikeizo. He is survived by his wife, Yoko, and two sons, Kazuhiro and Akihiko. 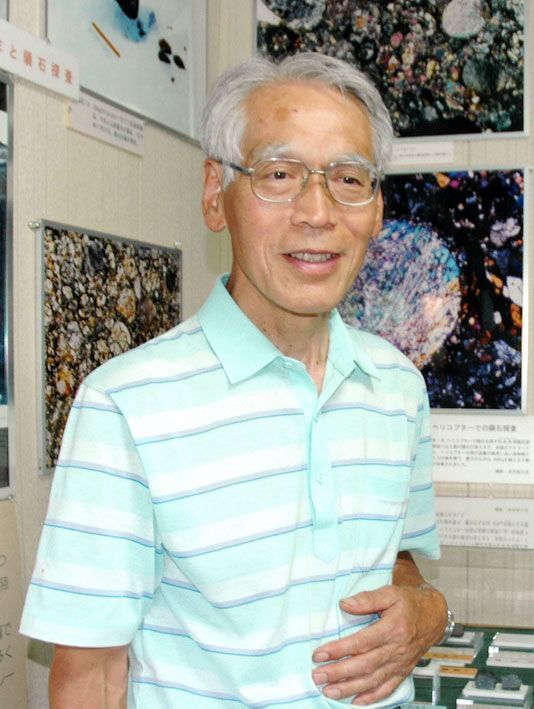 Keizo Yanai at his museum in 2010. Image Credit: Asahi Shimbun