Those of us who have been in the Society more than 10 years will remember Ursula Marvin as a vibrant and enthusiastic member of the society who loved what she did and enjoyed the friendships it brought her (Fig. 1). She was one of the first researchers to discuss the Allende meteorite and its fascinating refractory inclusions, and she made important contributions to the study of lunar samples and to collecting and describing Antarctic meteorites. She also made unique contributions to recording the history of The Meteoritical Society and to the history of meteorite research. Ursula passed away on February 12th, 2018, at the age of 96.

Ursula Marvin was born in Bradford, Vermont. She majored in history as an undergraduate student at Tufts University. However, she was required to take two years of science subjects so she started with biology and then moved on to geology. “It lit a fire”, she said. What fascinated her most were the lectures of Robert L. Nichols, head of the science department and a wellknown Antarctic geographer. Having grown up in rural Vermont, with its beautiful towering mountains, it was not difficult to be fascinated by Nichols’ lectures. Geology was beginning to hold great appeal. However, Nichols would not consider a request from Ursula to change majors. Geology was a man’s subject, he claimed; women could not do geology. So a history major it was. Ursula soon found that she was free to take as many geology courses as she wanted, even though it lengthened her undergraduate program. Mineralogy, petrology, mapping, and so on, and she included some courses in mathematics. In 1943, at the age of 22, she graduated and, with encouragement from Katherine Billings, who taught at Tufts and was married to Marland Billings, head of geology at Harvard, she applied for and won a Folsom Scholarship to study geology at Radcliffe College. Working mostly at Harvard, she earned a master’s degree in geology in 1946.

Upon graduating from Radcliffe, Ursula obtained a position as an assistant to Julian Goldsmith in the geology department of Northwestern University. Her topic was the optical mineralogy of synthetic feldspars and understanding their structure. Ursula published her first two papers in the Journal of Geology in 19501. Her reason for choosing Northwestern was that her husband was enrolled in dental school, however when he completed his course the two returned to Massachusetts. The couple almost immediately split up. Back at Harvard and working with Cliff Frondel on meteorites, she met Tom Marvin, a mining geologist and fellow PhD candidate, and in 1952 the two not only decided to marry but to spend two years in Brazil and Angola in search of ore deposits. They very much enjoyed this phase of their lives, traveling off-road, under the tree cover, and negotiating the many termite hills. After two years they toured through war-torn Europe and returned to the U.S. on the M.S. Stockholm, famous for its role in sinking the Andrea Doria.

Tom and Ursula expected to continue their PhD studies, with Ursula working with Clifford Frondel on the Lawrence Smith meteorite collection2. The meteorite collection had recently narrowly escaped being donated to the Smithsonian. Instead, Fred Whipple invited Ursula to join the research staff of the Smithsonian Astrophysical Observatory, which had just moved from Washington, D.C., to Harvard. She became a civil servant a few years later and lost interest in obtaining a Ph.D. Discoveries flowed like water and soon Ursula published her first meteorite paper on a cristabolite inclusion in an iron meteorite3 and the mineralogy of recovered fragments of the Sputnik 4 spacecraft4.

Throughout the sixties the Harvard-SAO ran a series of summer seminars that Ursula attended. At one point she was asked to contribute a lecture on crustal movements around the rift valley in East Africa. After considerable reading, Ursula was able to make a presentation on the history of continental drift that led to an SAO publication in 1966. A few years later, she was asked by the Smithsonian Press to write a book and this appeared in 1973 (Fig. 2)5. Ursula was also asked to write a children’s edition which to her lasting regret she declined.

The 1960s and 1970s were very productive years for Ursula and the SAO group. It was a happy group of up to about 10 people; a group photograph was an annual event (Fig. 3). As 1969 approached, Frances Bosch, head of the geophysics department at Harvard, asked Ursula for a stack of her papers and on the basis of these Ursula was awarded a Ph.D. Soon afterwards Ursula published the first paper on the Allende meteorite co-authored with John Wood6. The paper reported on unusual glass inclusions and, of course, the famous refractory inclusions (Fig. 4).

When the Apollo 11 samples were brought to Earth the Harvard-SAO group requested soil, which Wood thought would better represent the Moon as a whole better than the large rocks. Sure enough, the anorthites were found which ultimately gave rise to the idea that the Moon was once covered with an anorthositic magma ocean. The group went on to work on all the returned lunar samples, the six Apollo sites and three Luna sites, describing the mineralogy and petrology of the samples and comparing the various sites.7

Ursula was very fond of The Meteoritical Society and cared much about its well-being. For the 1975-1976 term she served as President and during her term the society met at Tours, France, and Bethlehem, Pennsylvania. Many important issues were dealt with during her presidency, such as breaking the Society’s ties with the AAAS, renegotiating a contract with Pergamon for the publication of GCA, the role of the Society in advocating NASA missions, and the relative roles of the local organizing committee and the Society in running annual meetings. Some of these issues were very difficult to deal with and others somewhat emotionally charged, so Ursula’s management abilities were most welcome by all concerned.

Ursula participated in the 1980, 1981 and 1982 U.S. Antarctic meteorite expeditions (Fig. 5). In 1969, an important year for our field, a Japanese team found meteorites in the Yamato Mountains, officially Queen Maud Land. Bill Cassidy wrote three proposals to the NSF for US teams to search for meteorites but it was only in 1976, after the Japanese brought back 600 meteorites, that he was successful. Ursula was part of the group that found the first meteorite from the Moon in Antarctica8. She was also asked to serve on an NSF advisory board for Antarctic meteorites and she edited three issues of the Smithsonian Contributions to Earth Sciences describing the discovered meteorites9. A few years later Ursula went to Antarctica again to visit the K-T boundary on Seymour Island. It was an interesting trip but scientifically frustrating because when the sample boxes were opened they were empty. Thieves had raided the boxes looking for valuables.

In the 1990s Ursula’s interests returned to history and she produced a series of well-researched and beautifully written articles. After visiting the archives at Strasbourg and Ensisheim with Tom, she produced a paper on the Ensisheim meteorite10. She followed up with articles on Chladni11, Troili12 and published a series of history articles on more general topics13. She also tackled the history of The Meteoritical Society, first in presentations at the Mainz meeting in 1983 and the Newcastle upon Tyne meeting in 1987 and then in a 53-page article in Meteoritics in 199314. This required raiding the Society’s archives, then at the Center for Meteorite Studies in Arizona State University, Tempe, and consulting people such as Harvey Nininger and Edward Anders. There can be few societies the size of The Meteoritical Society with its history documented so well (Fig. 6). These history publications led to Ursula becoming an active participant of the International Commission on the History of Geological Sciences.

Ursula also published a series of thirteen oral histories of prominent people in the field (Table 1). Her criterion for selecting participants was that they should have received the Leonard Medal or the Barringer Award of The Meteoritical Society. With her charm and enthusiasm she had no difficulty in finding interviewees, and inevitably there were some interesting moments. Bob Walker wanted to pull out when he learned that one of the journal reviewers thought his was “too conversational”, but went ahead when the reviewer was made known to him. Heinrich Wänke talked without interruption and invited Ursula to insert questions later as she thought appropriate.

When I took over producing the oral history articles I wanted to make Ursula my first subject, she was to be number XIV in the series, but after the article was ready to submit she decided against its publication. It was a rerun of an incident Ursula described to me in which one of her interviewees, George Wetherill, changed his mind at the last moment. “He was a good friend and he didn’t want me to, and I won’t”, she recounted to me. I followed her example in honoring her wishes.

Ursula was well-known and, whether she knew it or not, she served as a role model for many women in science. She participated in various efforts to promote women, especially in the seventies. Despite her experience with Nichols, a setback she thought easily overcome, she never felt much prejudice throughout her career. “Most people seemed to be pleased to have me around”, she told me. She laughed at Harvard’s President Summers for remarking that women were not as smart as men, which caused him to be “booted out”, and she recalled an instance where she was asked to talk at the Radcliffe Institute and chose to speak on Antarctic meteorites. “We normally talk about relationships”, she was told.

Ursula published over 160 research papers in her career and she received awards from the Geological Society of America (1986), the Geological Society (2005) and received The Meteoritical Society Service Award (2012) for her research on the history of geology. She won the Lifetime Achievement Award from Women in Science and Engineering from the U.K. campaign for Women in Science and Engineering (1997). A nunatak and asteroid have been named after her. Both for her personality and her contributions to our Society, Ursula will be missed. 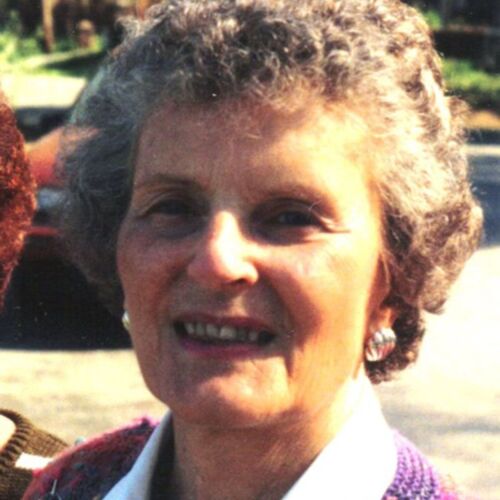 Fig. 2. Published originally as an SAO special report, Ursula’s first sortie into writing history was a book on continental drift published in 1973 by the Smithsonian Institution. Fig. 2. Continental Drift, The Evolution of a Concept 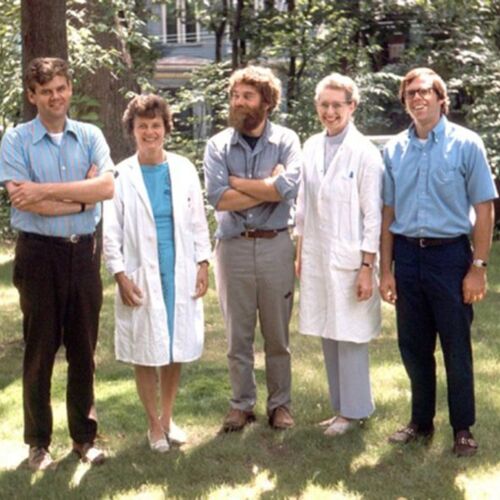 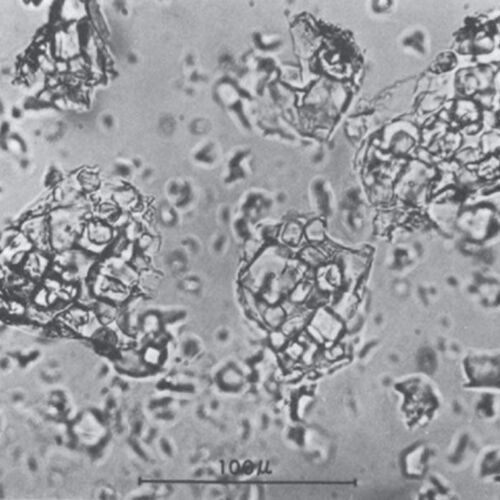 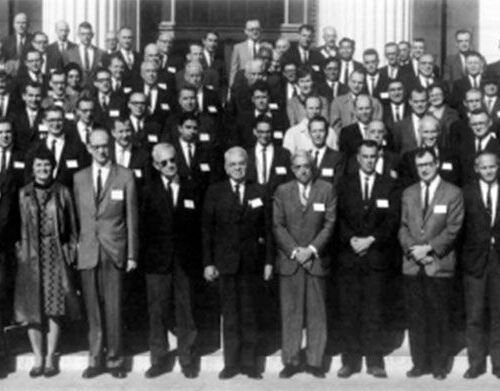 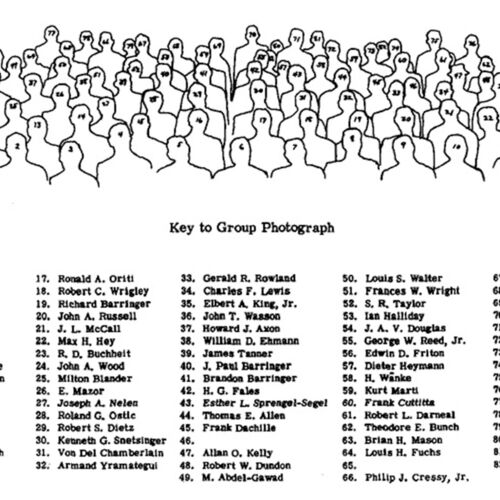 The Meteoritical Society in 1966 key